Itumeleng Khune (born 20 June 1987) is a South African footballer who plays as a goalkeeper for Kaizer Chiefs in the Premier Soccer League, and also the South African national team.

His career shot to fame when he saved three penalties from Esrom Nyandoro and Peter Ndlovu against Mamelodi Sundowns in the Telkom Knockout final on 1 December 2007.

He is described as a player with “higher than normal diving skills and reflexes, making him a skilled close-shot and free-kick stopper with elite kicking abilities and accurate goal kicks and punts, taking pressure off his defence and creating attacking opportunities for his offence.

Khune is technically skilled with his weak foot as well, which will allow him to accurately clear the ball with either foot when under pressure. 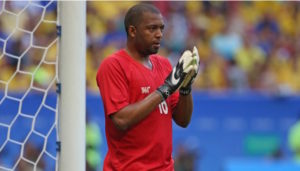 He is married to Sphelele Makhunga. The couple have a beautiful baby girl together and are expecting another.

He is one of the six children of Elias and Flora Khune. His father Elias, worked as a driver at a mine in Carletonville and also played amateur football as a striker. He is the brother of Lucky Khune who plays for Baberwa FC.

According to sources, he settled on R470,000 a month at Kaizer Chiefs when signing his new contract, a figure that works out around R5.6 million a year.

Drop your queries regarding Itumeleng Khune Biography below in the comment box.