Hungani Ndlovu (born 19 June 1994) is a South African actor, dancer, and presenter. He is the founder of SANS Group and plays Romeo Medupe in soap opera, Scandal. 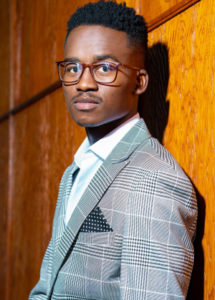 He was born on the 19th of June 1994 in Nelspruit City. Hungani Ndlovu is 27 years old as of 2021 and celebrates his birthday on June 19th every year.

He is happily married to Stephanie Sandows, who is also a fellow co-actor in the soap opera, Scandal.

He spent 3 years in the United States of America mainly in LA and NYC, studying and working. Hungani is a graduate in Acting for Film which he obtained in LA.

He was a student at Flii’Cademy (which is run by FliiStylz, one of Chris Brown’s choreographers) and attended classes from world-renowned choreographers including Ian Eastwood, WillDaBeast Adams, Parris Goebel and Nick DeMoura just to name a few.

His dancing career began while he was still very young and in April 2011, he had the conviction that this is what he wants to do for the rest of his life.

Hungani’s acting debut came when he had a lead role in Memoir Of An Honest Voice. It got nominated for ‘Best Short Film’ at the Africa Movie Academy Awards 2015.

He has an estimated net worth of around $200,000 which he has earned while acting.

Drop your queries regarding Hungani Ndlovu Biography below in the comment box.