Connie Ferguson (born 10 June 1970) is a Motswana actress, producer, businesswoman, and model popular for her role in South Africa’s Soap Opera, Generations in 1994. 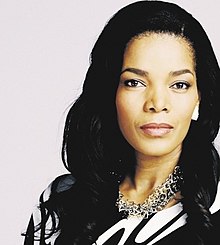 She was born on the 10th of June 1970 in Kimberley, Northern Cape in South Africa. As of 2021, she is 51 years old and celebrates her birthday on June 10th every year.

She is the daughter of Fish Masilo and Margaret Masilo. Her mother Margaret died in the year 2013.

She got married to Aaron ‘Shona’ Ferguson and together they have two daughters, Lesedi and Alicia.

The couple got married in November 2001 and renewed their wedding vows at a beautiful ceremony in 2011.

In an interview, she said, “Shona is my soulmate. Before he came along I didn’t know how to love so completely and I want my daughters to know their prince is out there. I still have a crush on my husband. I sometimes wonder what I’ve done to have the love of such a man.”

The actress has two daughters who are Lesedi Ferguson and Alicia Angel Ferguson. She is also a grandmother to her eldest daughter’s (Lesedi) son. The boy is known by the name Ronewa.

She starred in the M Net soap opera ‘The Wild’, as Marang Lebone, a helicopter-mom and the matriarch of the Lebone family that aired from 2011-2013. Connie has also played lead roles in ‘What If’, ‘Crime Reporter’, ‘Maitemogelo’ and ‘Soul City’ 1, 2, 3 and 4.

She also had a lead role in the production ‘Cape of Good Hope’ and made a guest appearance on ‘Okavango’.

She has also made some cameo appearances on Danger Zone, Matswakabele 2 and 3, Lesilo Rula 2, On The Right Track and Suburban Bliss. She produced and starred in the Mzansi Magic drama series, Rockville in 2013

Also in 2013, she was one of the celebrities who competed in the sixth season of a reality competition ‘Strictly Come Dancing’ that was aired on SABC 3.

The popular actress has an estimated net worth of $2 million which she has earned from her acting career.

She earns an estimated salary of R75000 per month.

Drop your queries regarding Connie Ferguson Biography below in the comment box.