He is popularly known as “The People’s Poet, Tall man, Mbulism, The Voice Of Reason”. 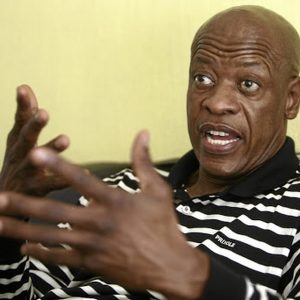 Mzwakhe Mbuli, Poet and musician during an interview with Sowetan in his Home near South Gate, Johannesburg. Pic: ANTONIO MUCHAVE. 29/12/2011. © Sowetan

Mbuli is married to Zukiswa Damse. The couple had met in 2015 in Mogale City, West of Jozi and got married in August of the same year.

Mbuli had been in a previous marriage to Thembeka Ndaba. They got married in  a traditional ceremony in KwaZulu-Natal in 2010.

His works include a book of poems, Before Dawn (1989), and albums Change Is Pain (1986), Unbroken Spirit (1989), Resistance Is Defence (1992), and Africa (1993). His poems are mainly in English but draw on his native Zulu as well as traditional praise poetry and rap. His best-known poem is “Change Is Pain,” a protest piece about oppression and revolution, which was initially banned until growing pressure forced South Africa to allow more freedom of speech. His first performance group was called Khuvhangano.Throughout the 1980s, Mbuli was repeatedly detained by the authorities and denied a passport to travel while playing a leading role in the cultural activities of the United Democratic Front.[3] His international career began in 1990 in Berlin, Germany when he shared the stage with Youssou N’dour, Miriam Makeba and Thomas Mapfumo.

An imposing figure, standing well over 6 feet (1.8 m) tall, he performed at the funeral of Chris Hani, the assassinated head of the South African Communist Party, and at the presidential inauguration Nelson Mandela in 1994. In 1996 Mbuli was invited to London to co-host, with British poet and activist Benjamin Zephaniah, the Two Nations Concert at the Albert Hall to honor President Nelson Mandela on his visit to London . Later in the year, he returned to the UK to join Peter Gabriel, Youssour N’dour and other prominent African artists to record the fundraising Aids Album.

In 1990, he was profiled in the documentary film Songololo: Voices of Change.

Mbuli was convicted in March 1999 for armed robbery and possession of a hand grenade – crimes he has consistently denied committing; he and his supporters have always insisted he was framed by the government for speaking out against corruption. He was held at the Leeuwkop Maximum Security Prison, until his release in November 2003. His most recent release is Mbulism.

He has an estimated net worth of $1 million which he has earned form his career.