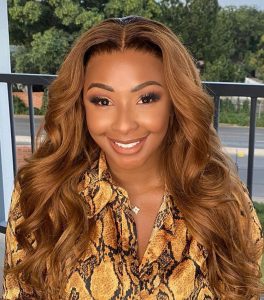 She is one of the most powerful celebrities in South Africa and is popular for her role as Mpho Bogatsu in Rockville.

She is the only child of Modiegi Thulo, her mother. Boity was raised by her maternal grandmother and much is not known about her father.

She is currently not in a relationship but has dated a few people in the past. In 2014, she dated Cassper Nyovest and even got engaged.

They split just after a year of dating in December 2015. She also dated Nigerian businessman and music video director, Stanley Obiamalu for two years. They broke up in 2019.

Boitumelo went to Potchefsroom Girls high school. She proceeded to study Psychology and Criminology at Monas University but could not continue with her education due to financial constraints.

She has an estimated net worth of $1.5 million which she has earned through her successful career as an actress and a businesswoman.

Boity was named as one of the creatives on Forbes Africa’s “30 Under 30” list.

In 2016, the TV presenter and actress acquired a luxurious house as a gift to herself for her 26th birthday. The house was reportedly worth close to R4 million.

She is known to adorn beautiful hairstyles to complement her great taste of fashion. Amongst her many hairstyles include the Bantu knots, ponytail, layered wave, cornrows, and pigtail.

Drop your queries regarding Boity Thulo Biography below in the comment box.