Aubrey Poo (born 17 May 1981) is a South African actor, television host, producer, singer and dancer. He is popularly known for playing the role of Pelo Mohale in SABC2 TV series, Muvhango. 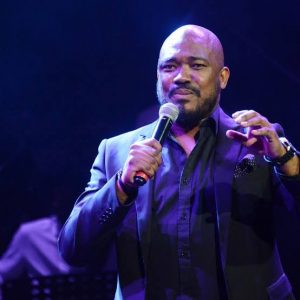 He holds a National Diploma in drama from the Pretoria Technikon. Poo graduated in December 2000.

Poo made his TV and film debut in 2005 and 2006, with roles in Gaz’lam, Muvhango, Zero Tolerance, Zone 14 and Akin Omotoso’s Nomzamo, as well as a lead role in the Afrikaans film Ouma se Slim Kind.

He was most recently seen on SABC as the male host of All You Need is Love and as the Genie of the Lamp in Janice Honeyman’s pantomime Aladdin.

He starred as the romantic lead in the stage musical Soweto Story in 2007, and then as Tom Collins in the musical Rent in 2008.

He portrayed documentary maker Themba in the SABC1 drama series Usindiso from December 2007 to March 2008. (Redemption).

From July to August 2008, he played Tebogo in the SABC2 mini-series Noah’s Ark, and in 2011, he hosted the first season of the SABC2 game show The Right to Win.

In 2013, he starred in the controversial SABC1 drama series After 9 as a lead actor.

Poo has an estimated net worth of of $300 000 which he has earned from his career as an actor.

Drop your queries regarding Aubrey Poo Biography below in the comment box.