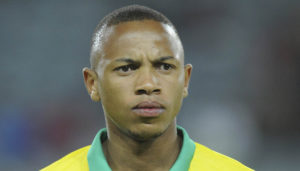 Andile Jali is married to a reality show star and fitness trainer Nonhle Ndala. Together they have twins who were born in June 2017 named Andile Junior and Amarè.

He began his career at the National First Division side Pretoria University and then moved to Soweto giants Orlando Pirates in the year 2009.

He was a member of the Orlando Pirates squad that made history in South African football by winning the treble in one season then being coached by Ruud Krol. The same team went on to defend their trophies making it a back to back treble.

He was part of the South African squad at the 2009 FIFA U-20 World Cup that was held in Egypt.

In 2010, Jali was named in the preliminary 30-man South African squad for the 2010 FIFA World Cup but narrowly missed out on the 23-man squad because of a mild heart condition.

We do not have full Information about his earnings or salary at his club and it will be updated whenever we do.

He is believed to have a net worth of around $1 Million – $5 Million (Approx.)

Drop your queries regarding Andile Jali Biography below in the comment box.