Kudakwashe Mahachi (born 29 September 1993) is a Zimbabwean footballer, who plays as a midfielder for SuperSport United F.C. and the Zimbabwe national team. 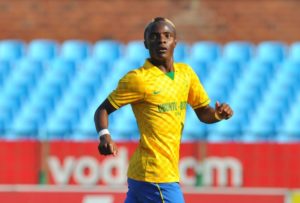 He is married to Martha Ndlovu and the couple has a child named Dineo Mahachi.

Mahachi started his football career at Highlanders Football Club junior set-up. It was at this same club he spent the end of his youth career with Highlanders, before moving into senior football with Bantu Rovers.

He had a short spell with Bantu after he agreed to join Chicken Inn. For two years, he remained a Chicken Inn player before departing in 2014 to rejoin Highlanders.

His next club move saw him depart Zimbabwe as he joined Premier Soccer League side Mamelodi Sundowns in South Africa.

His debut season at Mamelodi Sundowns brought 14 appearances and 1 goal before he was loaned out to fellow PSL club Golden Arrows in his second campaign.

At Golden Arrows, he scored four goals in twenty-five appearances in all competitions before returning to the Sundowns.

In January 2014, he was invited by coach Ian Gorowa to be a part of the Zimbabwe squad for the 2014 African Nations Championship.

He has appeared 14 times for his country and has scored two goals, his first in the 2014 African Nations Championship and his second in a friendly versus Malawi.