He also presents the game show The Hot Seat which airs on SABC 3. 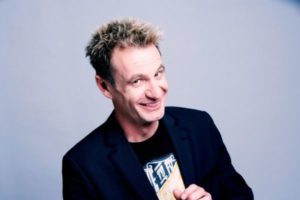 Alex jay is happily married to Fiona, they have been together for 27 years.

Alex had his Primary Education at Eastleigh Primary School in Edenvale. His secondary school education was based in Potchefstroom, he attended Potch Boys High School.

Alex later attended wit techs where he obtained a diploma in Theater Technology and extended his studies at the SABC where he completed all the R.A.B audio technology modules offered by them.

He is the presenter of The Hot Seat which airs in South African Broadcasting Corporation (SABC) TV.

He was the co-chair of Divine Existentialist Mission between 1986 and 1990.

He has an estimated net worth of $200,000 which he has earned as a media personality.

Jacaranda FM announced on Monday that, come October 15, the legend himself, Alex Jay will be presenting the WorkZone, from 12-4pm every weekday.

Barney Simon moves to the Jacaranda FM Regional broadcast of the WorkZone with Sascha van Gelder broadcasting to Limpopo and Mpumalanga every weekday between 12 and 4pm.

The station has further shored up their weekend offering with both Jay and Simon presenting Weekend Breakfast shows. Barney Simon’s High School Hits Classics will be back on Jacaranda FM every Sunday, between 7am and 10am, while Jay will continue to present Weekend Breakfast on Saturdays between 7 and 10am.

“Alex and Barney are loved and respected countrywide and the change is an opportunity to freshen up our weekday offering after the inclusion of Elana Afrika-Bredenkamp earlier in the year.

We have the best of both worlds with two of the longest standing pros in the game on air 6 days a week”, says Jacaranda FM’s GM, Kevin Fine.

“It’s part of our continued commitment to keep offering our audience and advertisers the quality presenters  they’ve always enjoyed together with our brilliant mix of music.”

Drop your queries regarding Alex Jay Biography below in the comment box.