Vusi Thembekwayo (born 21 March 1985) is a South African business mogul, global business speaker, author, and CEO of MyGrowthFund Venture Capital. He is considered one of the richest young people in Africa. 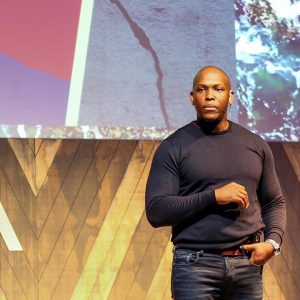 One of the most important attributes about him is that he recognized his God-given talent of public speaking from a very early age.

It has been reported that by the time he was 17 years, he was already ranked as one of the best in the whole African continent for motivational speaking.

Vusi got a good primary and secondary education though it was quite difficult. He went on to the university after secondary school but had to drop out in his first year due to financial constraints.

In a bid to raise money for his education, he started looking for a job but found none. Despite this little setback, Vusi moved on and used his skill of public speaking and convincing people to his financial advantage.

He ended up creating his first company called Global Professionals South Africa which he operated from the comfort of his bedroom.

The company was a global recruitment agency that recruited  apprentices in South Africa for jobs based in England and Australia.

Regardless of his status quo, Vusi never really stopped learning, in 2009, he completed the Advanced Management Program at Commerce Wits University.

Later, he joined the University of Pretoria GIBS and learned modeling and financial evaluation techniques.

In addition, he studied corporate finance and business administration with honors (from the University of Pretoria).

Palesa Thembekwayo is Vusi’s wife. The couple tied the knot in 2009 in style. Palesa is also an accomplished entrepreneur like her husband.

Vusi has three children, two boys, and a girl. His first child, Vusumuzi Nathaniel Thembekwayo III, was born in November 2010, his daughter was born on the 3rd of April 2012 while his second son was born in 2017.

He has an estimated net worth of R500 million which is approximately $36.4 million. Vusi is one of the richest young men in South Africa.