Aiden Kyle Markram (born 4 October 1994) is a South African cricketer who captained the 2014 ICC Under-19 Cricket World Cup-winning South African U-19 side. 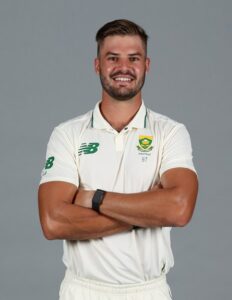 On October 9, 2014, Markram made his first-class debut for Northerns against South Western Districts. For the 2015 Africa T20 Cup, he was included in the Northerns cricket team. Markram played club cricket for Walkden in the Bolton Cricket League in 2016.

On the first day of the fourth test against Australia on March 30, 2018, Markram hit his career-high of 152 runs. He was named in South Africa’s Test squad for a two-match series against Sri Lanka in June 2018.

He has an estimated net worth of $400,000 which he has earned as a professional cricketer.