Morgan Gould (born 23 March 1983) is a South African international footballer who plays professionally for Stellenbosch as a defender. 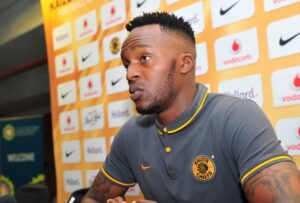 Born in Soweto, Gould began his senior career with Jomo Cosmos in 2001, before moving to Supersport United in 2008. He signed for Kaizer Chiefs in May 2012.

Gould was signed to Chiefs in July 2012 for R8.4million. He made his debut on 5 August 2012 against Mamelodi Sundowns losing 4-1. He scored his first goal against student outfit Bidvest Wits in the Nedbank Cup winning 3-0 with him scoring the second goal in 49th from a header from the near post.

In the first half, Siboniso Gaxa also scored his first goal for Chiefs. Earlier that day Orlando Pirates lost 4-1 to SAFA Second Division student outfit, Maluti FET College. He went to play only nine games and 721 minutes in the 2012-13 season due to an Achilles tendon surgery and a knee injury only recovering in pre-season.

In July 2016, Gould made his return to Supersport United, to be reunited with his former Kaizer Chiefs coach Stuart Baxter. He made his first start in a league match of the PSL Absa Premiership 2016–2017 season, in a 1-0 loss to Platinum Stars.

Gould made his international debut for South Africa in 2008 and was a squad member at the 2009 FIFA Confederations Cup.