Zandile Msutwana (born 6 July 1979) is a South African actress, presenter, and voice-over artist who has made a remarkable impact in the entertainment industry.

She is best known for her role as Akua Yenana on the SABC1 drama series Society. Zandile played this role from 2007 – 2010. 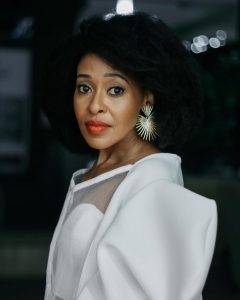 The actress was born on 6 July 1979 in King William’s Town, South Africa. She is 42 years old as of 2021 and celebrates her birthday on July 6th every year.

Zandile obtained a Performers Diploma in Speech and Drama from the University of Cape Town. Whilst at university, she featured in productions like Regan in King Lear, Matilda in The Suit, Aida in On The Brink and Chorus in Trojan Women.

Zandile is not married.

After graduating, Zandile performed in a production entitled Ingalo at The Langa Hall and took the part of Cordelia in a schools’ tour of King Lear. She also took up roles in several stage plays in Cape Town and Johannesburg.

Zandile Msutwana worked as a presenter on Heita for e.tv and played one of the students in the soapie Backstage. In 2005 she played the lead in the film Unrequited Love directed by Steve Berry and was featured in Beyond Berlin directed by Peter Samann.

In 2010, she was part of the SABC3 soapie Isidingo where she acted as Thembakazi who was the Head of News. In 2011, she joined the cast of Rhythm City and played the role of a young accountant called Rhonda Rababe.

In the Mzansi Magic soap opera Zabalaza, she acts as Lindiwe Cele who is the ambitious head of operations in the family business. She also plays a role as Vuyiswa the queen lead character.

Drop your queries regarding Zandile Msutwana Biography below in the comment box.