She attended Mashupje High School up until grade 11 in 1998 and dropped out to pursue her gospel music passion.

Winnie holds a certificate in Adult Basic Education and Training and a Degree in Psychology too.

She grew up in a small village in Ga-Sekhukhune, Limpopo and was raised by a single parent and has seven siblings. 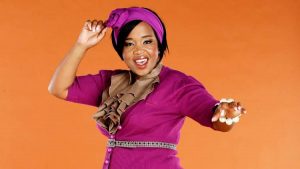 Winnie is married to Mokgogo Makgopa who is also referred to as to Peter Mashaba and they have been together for the past 14 years. The musician and her husband would love to have children but have had to deal with loss on their road to parenthood.

“In my church, I was taught to respect each and every person – I wish that can be done for me also.” In between her glittering gospel career and presenting Amahubo, Winnie also helps Peter run their publishing and events management company.

“He doesn’t like for me to talk about us and I respect that,” she says of her husband, who she describes as shy.

Drop your queries regarding Winnie Mashaba Biography below in the comment box.