Khanyi Mbau (born 15 October 1985) is a South African actress, singer, media personality, and socialite. She rose to fame in 2005 when she replaced Lindiwe Chibi as Doobsie on SABC 2’s Muvhango. 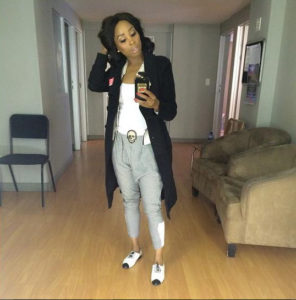 She was married to Mandla Mthembu from 2006 to 2009. She got romantically involved with Mandla Mthembu (former obben Island Inmate who is a multi-millionaire) in 2005 when he was 50 years old.

They got married in July 2006. In 2007, they announced that they were living apart after the South African Music Awards incident at Sun City which involved Mandla Mthembu accusing Khanyi of infidelity and gold-digging. In 2007 the couple reconciled.

In 2008 the reports of financial turmoil begin to emerge in the wake of delayed payments of Lamborghinis, warrant of arrest for Mandla Mthembu after he allegedly failed to pay maintenance for his two daughters with his former wife Dolly Matshabe. In 2009 they separated.

In October 2009 she was romantically involved with 51 years old construction mogul Theunis Crous who had just bought her a BMW Z4. In January 2010 Theunis ended the relationship and took back his BMW Z4.

She got together with Tebogo Lerole in July 2014 and they are still together amidst rumours claiming that the pair is pretending to be together.

With her marriage to Mandla Mthembu, they were blessed with a daughter, Princess Mthembu.

Khanyi Mbau is believed to have an estimated net worth of around $10 million. This has been earned through her career.