Uyanda Mbuli (born 29 December 1978) is a former model, fashion designer, marketer, and actress. She is also a member of the Gauteng Film Office Board and was born 29th December 1978 in KaNyamazane, Nelspruit (Mpumalanga) in South Africa.

Uyanda made her acting debut when she played the role of Nomonde on the SABC1 drama Tshisa.

She won Miss Cape Town 1996 pageants and in 1997 won the Miss Mpumalanga Province pageant. Mbuli was a contestant in the Mrs Globe 2005 pageant, finishing sixth overall.

She attended the Guardian Angels Catholic Girls School. Later she graduated from the University of Western Cape with a Bachelor’s Degree in Commerce.

She studied Project Management at the University of Johannesburg. She has a diploma in Sales & Marketing Management from Damelin College. 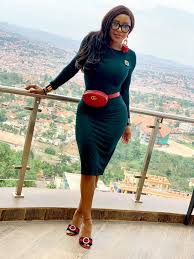 In 2002, she got married to Sisa Mbuli, and together they had a son in 2003, Landa. Some years later the two of them divorced.