She started her career as a newscaster and then moving to the magazine industry at age 22. It was at this same age she took over as the Editor of True Love Magazine.

Under her leadership, the magazine grew and expanded into various countries outside SA including Nigeria. 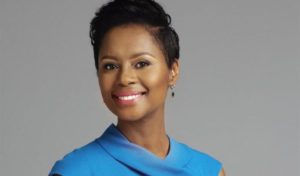 First of all, in 1992, she married Sthembiso Mkhize but after some years together, they had their divorce in 2003. She later married Chinezi Chijioke in 2009.

She is the mother of two who goes by the names Hugo Mkhize and Khaya Mkhize.

She is a graduate of The Girls’ Collegiate School, in Pietermaritzburg hence becoming the first black girl there.

Khanyi attended University of the Witwatersrand, Johannesburg, and graduated with a BA degree in Communications and Industrial Psychology.

She also attended Harvard University and also graduated with a Masters in Business Administration.

Khanyi Dhlomo walked down the aisle with her Nigerian-American beau, Chinezi Chijioke.

The beautiful ceremony was on December 20, 2009, Allee Bleue in Franschhoek – the Cape Winelands, South Africa.

While completing her MBA at Harvard Business School, as a result, she met her husband who is from Arochukwu, Abia State.

Their meeting was in 2005 at a fundraiser for the African Leadership Academy which was founded by Fred Swaniker.

The couple is based in South Africa where Khanyi co-owns a media company while her husband is a consultant for McKinsey & Co.

The company publishes various magazines including Destiny which is a popular women’s business and lifestyle magazine.