Redi Tlhabi (born 5 May 1978) is a South African TV and radio presenter, MC, author and columnist. She is a brand ambassador for Clarins, a French cosmetic company.

She studied at Rand Afrikaans University, Johannesburg where she graduated with BA degree in Communications.

Redi graduated with an honours degree in Social Sciences and English Literature from the University of Johannesburg. She obtained her Master’s degree in African Literature in 2008. 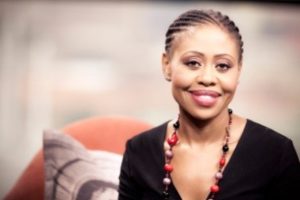 Redi has run the Comrades Marathon three times and is a member of the Rand Athletics Club.

She has been married to Dr Brian Tlhabi since 2010 and together they have two children. She is also a stepmother to two daughters from Brian’s previous marriage, Lesego Tlhabi and Ofentse

In the year 2012, she wrote ‘Endings and Beginnings (Jacana). The book received popular and critical acclaim and received the Alan Paton Award in 2013.

She has an estimated net worth of $300,000 which she has earned as a TV and radio presenter.

Drop your queries regarding Redi Tlhabi Biography below in the comment box.