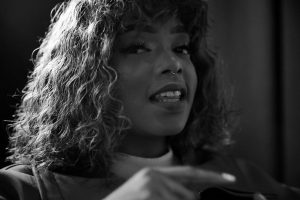 Her biological mother abandoned her at KwaZulu-Natal hospital when she was just three weeks old. Luckily, she was adopted by the Donnell family, a white family. She has a very strong relationship with her adoptive parents, Phil and Deborah Donnell.

Phil has always been in support of her musical career both physically and emotionally. Deborah is based in the United Stated and takes out time to see Shekhinah.

Growing up in a racially different family was not as challenging for Shekhinah as one would expect for an average black child. She opened up during an interview that she never felt like an outcast during her childhood but felt so much love.

At 17 years, she participated in Season 7 of M-Net’s South AfricanIdols. She finished amongst the top 32 contestants in that edition. She participated again the following year and finished sixth.

Shekhinah stated that the only time she experienced racism was in 2018 when she came to Johannesburg. She was always around black people who were very Black Conscious and she wasn’t. Her experience with racism has made her believe that humanity comes first, before every anything else.

Shekhinah dropped her debut studio album titled “Rose Gold” on October 6, 2017. The album was certified gold by the Recording Industry of South Africa on January 24, 2018 and later certified platinum on August 31, 2018.

She has an estimated net worth of $500,000 which she has earned as a musician.

Drop your queries regarding Shekhinah Biography below in the comment box.