Andrew Spence (born May 9, 1983) is a drummer and a founding member of Hard Rock band, Starseed. He performed briefly with New Zealand progressive rock group, Agent and has also performed and recorded with Hip-Hop Crossover band The Spindle Sect.

He is also known as Animal Andy from his work as a DJ on UK Based Internet radio station Totalrock which later became Bloodstock Radio. 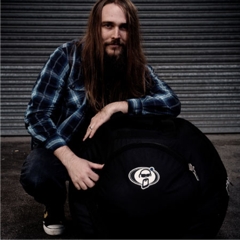 At the age of 12, Andrew was hit with the drumming bug after a “2 week rebirth” into the world of rock n´ roll when he first heard John Bonham’s work on Led Zepp´s legendary “Achilles Last Stand”. “I couldn’t put the CD down” exclaims Andrew, “I would get home from school and ritualistically I had to listen to that song at least 3 times a day and after about 2 weeks of this, my parents lives would change for the “worse” when I said ‘I wanna be a drummer’!”.

Andrew was taught his craft at his local church and at the age of 15 won a special award for Best Drummer at one of South Africa´s biggest music competitions. Along with brother Russell Spence (vocals, guitars), Starseed was formed in January 2000 and the band relocated to London (UK) in 2001. Starseed have powered into the UK Music scene since the release of their album “Peace Machine” in Aug 2009 with features in Kerrang! Magazine, XFM live sessions and touring the UK extensively.

Highlights of 2010 have included an O2 Academy Summer Tour with rap/rock heavyweights, Senser and slots at Download Festival and Hard Rock Hell IV. More recently Andrew has been playing with Crossover Rap/Rock band The Spindle Sect and recorded their most recent album Bubonic Tronic, released in April 2012.

With The Spindle Sect

With Ethel My Love

Drop your queries regarding Andrew Spence Biography below in the comment box.