Pierre Issa (born 11 September 1975) is a South African former professional footballer who played as a defender. He is the current sporting director of the Greek side Olympiacos. 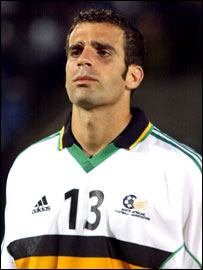 Born in Germiston, South Africa, Issa began playing for French semi-professional side Dunkerque. He started his professional career with Marseille in 1995 and went on to play in the 1999 UEFA Cup Final.

He moved to Chelsea on loan in January 2001, although he did not play a competitive game for the London club. He is best known in England for his spell with Watford in 2001–02. Signed by new manager Gianluca Vialli from Marseille, Issa scored once, against Portsmouth.

Issa was memorably dropped by his stretcher-bearers after an injury in a home game against Birmingham City, and was put on the club’s transfer list on 14 February 2002, only five months after he had signed for the club. He never played for Watford again, but played for his country at 2002 FIFA World Cup whilst still contracted to Watford.

After leaving Watford, Issa signed for Olympic Beirut and won both Lebanese Premier League and Lebanese FA Cup in his first season with the club, but was released in the 2004–05 season as the club’s ownership was changed due to financial considerations. He signed for Ionikos of Greece and later for OFI Crete, also in Greece, where he stayed until 2009.

Issa played 47 times for South Africa since making his debut on 15 November 1997 against Germany, having also captained his country.

In the 1998 FIFA World Cup, he scored two own goals against France (however the second of these goals was later on acknowledged as scored by Thierry Henry, but the country still reels from those goals). Issa was also selected for the 2002 FIFA World Cup squad.