Nokuthula Mabika is a South African actress, TV presenter and dancer. She is popularly known for the role she played as Thobile on the Uzalo TV series. 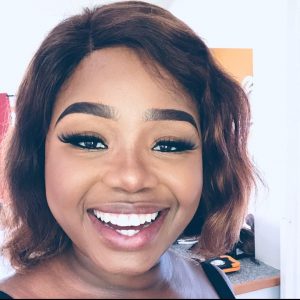 Nokuthula lost her mother at the age of 12 and had to be raised solely by her father. Her father however had seven other children from six different women. The actress said they are a big family and were all raised with so much love by their father.

She was taught by her father at a young age to be strong and able to fight her battles in life.

Nokuthula Mabika has a BA degree in Arts and Culture (drama specialization). She also has a degree in Drama, Music and Movement Techniques from University of Zululand.

She has starred in numerous South African movies and was introduced to Uzalo viewers as Thobile, a girlfriend of Mastermind (played by Ntokozo Dlamini), KwaMashu’s famous thug.

She now owns a salon on the show and has been juggling managing this venture and her dramatic personal life.