Nakhane (born 3 February 1988) is a South African singer, songwriter, actor, and novelist. Having grown up among a Christian community in Port Elizabeth, at 15 he moved to Johannesburg, leaving the church in 2013 and publicly celebrating his queerness with his debut album Brave Confusion. 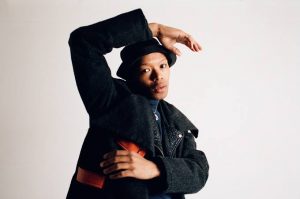 He found both controversy and critical acclaim with his starring role in John Trengove’s 2017 feature film Inxeba (The Wound), and relocated to London to record and release 2018’s heavily autobiographical album You Will Not Die.

His work has been championed by Elton John, who interviewed Nakhane on his Beats 1 radio show, and Madonna, who cited him as one of her two favourite artists and said his music influenced her 2019 album Madame X.

Nakhane was born Nakhane Lubabalo Mavuso in Alice, a small rural town in South Africa’s Eastern Cape, raised by his grandmother until he was five years old. At seven he was adopted by his aunt, whom he has said is “to all intents and purposes” his mother, and her husband, growing up with them in Port Elizabeth, attending a racially-integrated school, where he learnt to speak English.

A few years later he changed his surname to theirs, Mahlakahlaka, and, affirming a more distinctive identity, dropped his commonplace middle name. At 15 he moved to Johannesburg. Having known he was gay for a few years, at 17 he came out to his friends and cousins.

At 18 he began reading the work of James Baldwin, strongly identifying with the black queer characters; Baldwin became a substantial influence. Nakhane studied two degrees at college – film music composition and acting, then literature, leaving both after a year.

At 19, an ex-girlfriend’s mother outed Nakhane to his aunt, who took him to prophets who encouraged him to renounce his homosexuality. Meeting a pastor’s son, he became devoutly religious, joined a conservative Baptist Church, regularly attended bible studies, undertook gay conversion therapy, and preached against homosexuality.

Throughout five years of attempting to deny his homosexuality, during which time he would secretly visit gay clubs, he suffered guilt, fear and self-hatred.

He began to doubt the existence of God, and at 25 had a breakdown, sleeping on sofas thanks to compassionate friends the church had told him to cut ties with. He extricated himself from the church and became more black-conscious.

Nakhane knew he wanted to be an artist after singing at a Christmas carol concert at the age of seven. His aunt was a classically trained opera singer and at home would play Handel, Mozart and Bach alongside Marvin Gaye and the O’Jays.

At school, Nakhane played the piano, studied classical trombone, played in a wind band and a steel band, and sang in a choir. As a teenager, he was inspired by George Michael’s music and unapologetic queerness and was later influenced by Radiohead, Leonard Cohen, and South African acts such as TKZee, Brenda Fassie, Hugh Maskela and Thandiswa Mazwai. He worked part-time in a music shop, musically educating himself via the CDs he brought home.

At 19 his aunt bought him an acoustic guitar and he began writing songs, performing in open-mic clubs and eventually getting signed, calling himself Nakhane Touré in tribute to Malian musician Ali Farka Touré and as an ode to pan-Africanism.

In 2014, Nakhane won the Best Alternative Album award at the South African Music Awards. Although he had left the church, that night his pastor telephoned to tell him he was excommunicated.

Electronic music and You Will Not Die (2015-present)

Disillusioned with the folk scene’s perceived authenticity, Nakhane began to gravitate towards a more electronic sound. In 2015, he had a club hit, “We Dance Again”, with house DJ Black Coffee, then began writing his second album.

Nearing his 30s and looking for closure, he wanted to end his 20s “on a positive note instead of an angry and bitter note”, the new songs inspired by his childhood, his family, and his leaving the church.

With a new sense of freedom and self-ownership, he dropped his stage surname Touré, viewing You Will Not Die as a rebirth. The album title was taken from Proverbs 23:13, referring to child discipline: ‘If you punish them with the rod, they will not die.’

Eschewing acoustic guitar, he wrote it on piano,  recording 98% of it with producer Ben Christophers at the latter’s London studio; Nakhane settled in the city in February 2018. He wanted to work with electronic drums and synthesisers, and told Christophers he wanted the album to sound like the second side of David Bowie’s Low, “but with the spirit of Nina Simone.”

It was released on 16 March 2018. Clash Music called it ‘an incredibly beautiful document of self-acceptance, a soaring ode to self-worth, a blissful, remarkably assured piece of creativity.’ Q magazine wrote that it was a ‘remarkable’ album, ‘defiantly modern and unashamedly emotional.’

A deluxe edition, featuring the Anohni collaboration “New Brighton”, was released in North America on 22 February 2019. Pitchfork wrote that the album was ‘an instant revelation on its own terms,’ calling it ‘strikingly intimate.’ In May 2019 it won Best Alternative Album at the South African Music Awards.

In June 2019, to mark the 50th anniversary of the Stonewall Riots, sparking the start of the modern LGBTQ rights movement, Queerty named him one of the Pride50 “trailblazing individuals who actively ensure society remains moving towards equality, acceptance and dignity for all queer people”.

Following the release of Brave Confusion, film director John Trengove contacted Nakhane, asking him if he’d consider making the music for his 2017 film Inxeba (The Wound). After they met, Trengove asked him if he’d audition to play the lead role of factory worker Xolani in the film, which deals with ulwaluko – an Xhosa initiation into manhood involving circumcision, which Nakhane had undertaken aged 20.

Due to protests, intimidation and vandalism in response to the film in South Africa, many cinemas cancelled screenings. Having initially been classified as a 16LS, it was then reclassified as X18, a certification usually reserved for hardcore pornography.

In response, on social media Nakhane wrote of homophobia, saying he refused ‘to live in shame for your patriarchy to keep on living.’ Following “an onslaught” of graphic death threats for his part in the film, he resolved to speak out in the media as much as possible.

Despite media perception that he left South Africa because of the threats, he said that he moved to London in order to tour Europe less expensively, but admitted that ‘times were not necessarily nice for me in South Africa,’ and said the death threats made it hard to return to the Eastern Cape.

The Hollywood Reporter called his performance ‘an impressive screen debut.’ The Playlist wrote that he was ‘incredibly affecting as this quiet, secretive, lonely soul.’

After watching Inxeba (The Wound) and then listening to his music, John Cameron Mitchell cast Nakhane as Jairo, ‘a young man who struggles with a host of demons’, in 2019’s Anthem: Homunculus podcast musical.

In 2015, Nakhane’s debut novel Piggy Boy’s Blues was published, set in his hometowns of Alice and Port Elizabeth and portraying a Xhosa royal family. It was nominated for the Barry Ronge Fiction Prize and the Etisalat Prize for Fiction.

Nakhane has an estimated net worth of $500 000 which he has earned form his career as a singer, songwriter, actor, and novelist.