Mohale Motaung (born 9 July 1994) is a South African entrepreneur, student, model, and actor. He is best known for his appearance as Odirile, an optimistic gay economics student in the MTV Shuga series. 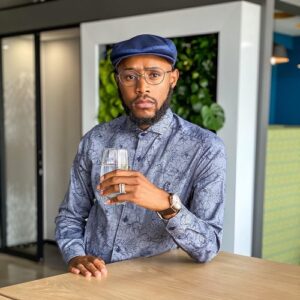 He was born on the 9th of July 1994 in Kibler Park, Johannesburg, Gauteng. As of 2021, he is 27 years old and celebrates his birthday on July 9th every year.

He majored in Marketing and Economics in the Institute of Marketing Management (IMM) Graduate School in South Africa.

He is married to Somizi Mhlongo. They had their traditional wedding on the 28th of September 2019 taking place at Mohale’s family house.

Glam Troupe’s CEO and manager is Mohale Motaung. He is also the face of the CSquared apparel line.

He made his acting debut in February 2019 on MTV Shuga: Down South as Odirile, a confident gay economics major.

He and his husband Somizi Mhlongo star in the reality show Living the Dream with Somizi.

He has an estimated net worth of $300,000 which he has earned as an actor, model, and entrepreneur.

Drop your queries regarding Mohale Motaung Biography below in the comment box.