Lamiez Holworthy (born 12 June 1992) is a South African DJ, television, and radio personality. She is best known for hosting the music show Live Amp on SABC 1. 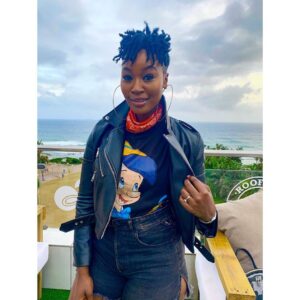 She was born on 12 June 1992 in Pretoria, Gauteng Province, South Africa. She is 29 years old as of 2021 and celebrates her birthday on June 12th of every year.

Holworthy attended three schools for her primary education. She then went to Pro Arte Alphen Park from grade 8 to 9 before her matric in 2009 from Laudium Secondary.

In 2012, she proceeded to study media at the Boston Media House.

With the support of her family, Holworthy has progressed in her career as a DJ. In 2013, she was a guest DJ at Tshwane FM on DJ Malwela’s show.

The exposure landed her the role of hosting the lifestyle show called Living the Dream, which aired on Tshwane TV. She then landed her biggest role on SABC’s Live Amp after seven years of pain and hard work.

She is in a relationship with South African Motswako rapper Khuli Chana.

She has an estimated net worth of around $1 million which she has earned throughout her career.

Drop your queries regarding Lamiez Holworthy Biography below in the comment box.