Leleti Khumalo (born 30 March 1970) is a South African actress, musician, and radio presenter popularly known for her leading role in the movie Sarafina.

She is also popular for her roles in other films such as Hotel Rwanda, Yesterday and Invictus. 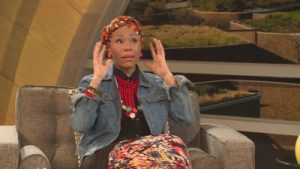 She later got married to businessman Skhutazo Winston Khanyile in 2012. Skhuthazo is two years her junior and together they have twins

She gave birth to twins on 24th May 2013, Ulwenzile Khanyile and Yamukelani Khanyile.

Drop your queries regarding Leleti Khumalo Biography below in the comment box.