She is also famous for playing a double role in the 1999 science fiction film ‘Bicentennial Man.’

Her performance in ‘Bicentennial Man’ earned her a nomination at the ‘Blockbuster Entertainment Awards.’ She has also appeared in various South African plays such as ‘Stille Nag,’ ‘A Chain of Voices’ and ‘Houd-den-bek.’ 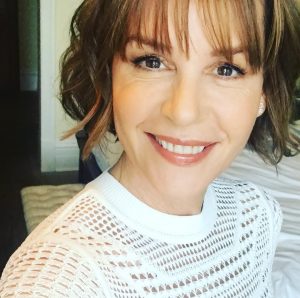 Embeth was born to Jean and John Davidtz who were of mixed origin. Her father was a student of chemical engineering at Purdue University when she was born.

Her family moved to Trenton, New Jersey, and then back to South Africa when she was nine years old. After moving to South Africa, John Davidtz got a job with Potchefstroom University as a lecturer.

She has a younger sister who works at the ‘Nova Southeastern University’ as a psychologist. She also has a brother. Davidtz has Dutch, English, and French ancestry.

Davidtz learnt Afrikaans before attending a school in South Africa. She attended The Glen High School and graduated in 1983.

She went on to Rhodes University in Grahamstown where she obtained a degree in British literature.

She married Jason Sloane, an entertainment attorney on June 22 2002. Their marriage is blessed with two beautiful children, Charlotte and Asher Sloane. Charlotte was born in 2002 while Asher was born in 2005.

She made her acting debut at the age of 21 when she was cast to play Juliet in the stage production of William Shakespeare’s tragedy ‘Romeo and Juliet.’

Her television debut was in 1989 when she played a minor role in a TV series titled ‘Screen Two.’ In 1991, she was cast to play the lead role of Tessa van Dyk in a South African film titled ‘Nag van die Negentiende.’

Her Hollywood career began in 1995 with movies such as Murder in the First, Merchant Ivory, The Gingerbread Man, and Bicentennial Man. In 2002, after appearing in an American drama The Emperor’s Club, Davidtz took a break from acting in 2002 and returned in 2005 to appear in a comedy-drama film Junebug

She currently resides in Los Angeles, California with her family in a 3775 sq ft property. The property was acquired in October, 2006 for a sum of $6.741 million. It includes 4 bedroom and 5 baths.