Faith Nketsi (born 30 December 1994) is a popular South African socialite and video vixen who is popularly known as the ‘Queen of Twerk’.

She is also a model whose style and sultry selfies have earned her a massive number of fans on the internet.

Faith was also recognized as a member of the female dance crew Pro-Twerkers before she left the group to become a popular event host at nightclubs around South Africa. 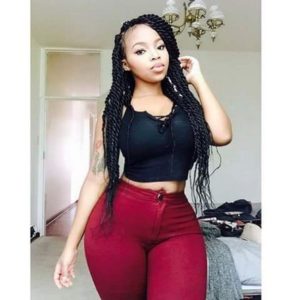 In 2014 she was in a relationship with Davido as he shared a photo of himself and Faith kissing in bed. She is not married yet but has been in limelight due to relationship rumors.

From Davido, she moved on to date Makhosini Sihlali who is a rising star and entrepreneur in the events management industry and also a club manager.

There have been reports that she is now dating Zimbabwean Morning Show host, Tino Chinyani. This was confirmed with a live Instagram video that has since been removed.

She has an estimated net worth of $800,000 which she has earned as a socialite and video vixen.

Drop your queries regarding Faith Nketsi Biography below in the comment box.