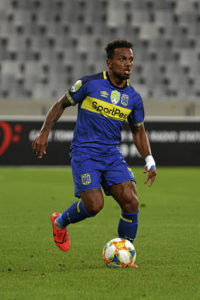 He was born on the 8th of July 1990 in Port Elizabeth, South Africa. As of 2021, Kermit is 31 years old and celebrates his birthday on July 8th every year.

He dated Lauren Koehoorn for 8 years they broke up in 2018. The couple together has two children.

He moved to Pretoria as a teenager where he made his professional debut with SuperSport United in 2007. After spending the next two seasons in the Netherlands with Feyenoord and Excelsior, he returned to SuperSport United.

He made over 50 appearances during his second spell with the club, helping his side to the Nedbank Cup title before joining Orlando Pirates in 2013.

Erasmus led Pirates to the same cup title in 2015 before leaving the club the following year to join Rennes in France.

He struggled with Rennes and shortly after spending a loan stint on at Ligue 2 side, Lens, he was released by the club. Erasmus spent the remainder of 2018 in Sweden, with Eskilstuna, and Portugal, with Vitória de Setúbal.

He has an estimated net worth of around $500,000 which he has earned throughout his career as a footballer

Drop your queries regarding Kermit Erasmus Biography below in the comment box.