Jeff Radebe (born 18 February 1953) is a South African politician and was appointed as the Minister of Energy by Cyril Ramaphosa on 26 February 2018.

His full name is Jeffrey Thamsanqa Radebe and he previously served as a Minister in the Presidency: Planning, Monitoring, and Evaluation. 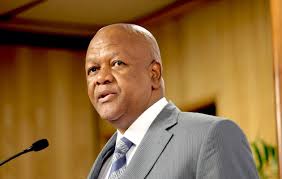 He is married to Bridgette Radebe and together they have three children Mandisa Radebe, Vukani Radebe and Malaika Radebe.

Mr Radebe received an honorary doctorate in Humane Letters by the Chicago State University in 1996, and a Leucospermum flower named Radebe Sunrise was bestowed on him on 23 October 2005.

He was awarded Honorary Colonel by the South African Air Force, Mobile Deployment Wing in 2006.