DJ Fresh (born 15 October 1972) whose real name is Thato Sikwane, is a radio DJ, Music producer, entrepreneur and radio and TV producer who is known as a host on Metro FM.

Fresh has released 32 albums to date and has worked on many tv shows and owns companies of his own. 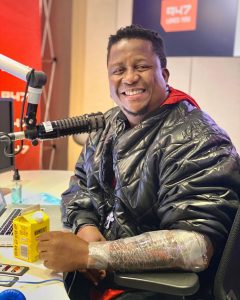 He born in Botswana but moved to South Africa in 1994 to further his studies. He started deejaying at the early age of 13 years.

He used every opportunity he got to showcase his talent while he was at Maru-a-Pula boarding school. He made his debut on Botswana RB2 radio show in 1992.

Thato’s father had wanted him to be a lawyer but he had other plans. He left law school and applied for a full-time diploma in media studies at the Johannesburg Boston Media House. He specialized in advertising and journalism.

Thato Sikwane is married to Thabiso Sikwane, a radio presenter and trained swimming instructor. The couple has been married for over 17 years. Thato met Thabiso in 1996 when they both worked at YFM.

Thabiso has worked for Power FM and Kaya FM. He has four children, three children together with his wife and a daughter from a previous relationship. His eldest daughter graduated from the University in 2019.
Career
While in his third year at Boston Media House, He got a job at YFM where he spent eight years. He then moved to 5FM.
DJ Fresh spent over 10 years at 5FM before moving to Metro FM in 2017. He took over 947’s Drive Time show in August 2019.

DJ Fresh has over 32 albums and mixes over the years. These have earned him a top position in the industry across South Africa. Here are some of Dj Fresh South Africa songs and albums.

He has his own company called Big Dawg Productions. The studio and record label has been successfully operating for many years now. Fresh also has a joint venture with DJ Euphonik called F.Eu.

He has an estimated net worth of $2 million but he is known to be one of the richest DJs in South Africa. According to Sunday World, DJ Fresh is the highest-paid radio presenter with an appetizing hourly pay of R3,600 at Metro Fm.

He also earns quite a lot from MCing and speaking at events.