Guy Buttery (26 November 1983) is a South African musician primarily known as a guitar player.Cited as “one of South Africa’s most influential artists over the past decade” by The Sunday Independent, Buttery’s distinctive acoustic style is influenced by traditional South African culture, music and instrumentation. 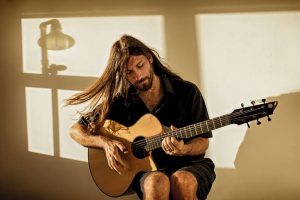 Guy Buttery was born in a small coastal town outside of Durban, KwaZulu-Natal in South Africa. Buttery has found a way to play his unique style of guitar that is deeply South African while also speaking a global musical language. There’s credibility to his being described by pundits as a South African musical treasure. He studied Jazz at Kwa-Zulu Natal Technikon with Nibs van der Spuy and later on at the Durban School of Music, where he studied classical guitar with Leandros Stavrou for a brief period.

At the age of 18, Guy Buttery’s debut album was nominated for ‘Best Newcomer’ and ‘Best Instrumental’ at the South African Music Awards (SAMA’s) making him the youngest nominee in the history of the event. Guy has since gone on to collect two SAMA’s in 2010 and again in 2014. He has also received numerous other major accolades including The Standard Bank Ovation Award for his live performances at the National Arts Festival, and has been honoured with more of these prestigious awards than any other musician.

Guy was then invited to perform his works with the 52-piece KZN Philharmonic Orchestra dubbed “Africa’s greatest ensemble” with his solo performance voted “Top Live Show” by The Cape Times and was selected by the public as one of South Africa’s Top Young Personalities by The Mail & Guardian. In 2014 Guy married Brazilian fashion designer, Julia Mendes Pinheiro Franco.

In 2018, Guy received the highest accolade for a musician in South Africa and was awarded the Standard Bank Young Artist Award. In almost 4 decades of honouring artist throughout the country, this was the first time since its inception that the award was presented to a musician outside of the classical realm. The following year, Guy toured across 5 continents and released his debut collaborative album, titled “Nāḍī”, with Indian born sitar player and vocalist, Kanada Narahari. The album was voted a “Top of the World” release by leading World Music publication Songlines.