Anton Goosen (born 5 March 1946) is a South African musician and songwriter. He became a pivotal figure in Afrikaans music and is generally regarded as the father of Afrikaans Rock. 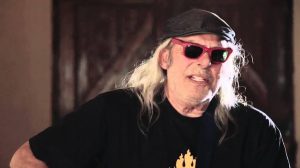 As a young boy in school, Goosen was not considered ‘bright’. At the age of 9, his teachers sought to place him in a class for mentally challenged children as his behaviour became disruptive. When he was 17, a guidance counsellor suggested to Goosen that he abandon his music career.

In 1963, Goosen was expelled from boarding school after being caught in a bath playing guitar and smoking. His guitar was confiscated and its case filled with bricks. Despite this, Goosen persevered and formed his high school’s first rock band that same year.

Goosen attended the Teachers Training College Heidelberg, and qualified in Special Education after which he taught school for awhile, and worked as a writer and reviewer for Beeld, before becoming a full-time song writer.

He released his own first album, Boy Van Die Suburbs, in 1979, and it sold over 80,000 copies. He was noted for being the first to produce an album of his own works entirely in Afrikaans. He used irony and symbolism in his songs to protest against removals to Bantustans and to underline the injustices behind the Soweto riots.