George Koumantarakis (born 27 March 1974) is a retired South African football player of Greek descent. He was born in Athens, Greece but grew up in Durban, South Africa.

Was top goals scorer in the PSL in 1997. He is mostly remembered for his time at FC Basel where he played in the Swiss Super League and UEFA Champions League.

He played for the South African national team and was a participant at the 2002 FIFA World Cup. 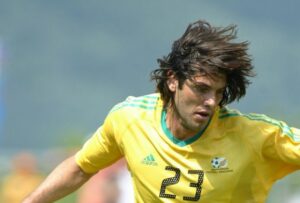 Koumantarakis started out at South African team AmaZulu F.C. in 1992. He left the club after six months, however, to join Manning Rangers where he won the South African title. He joined one of South Africa’s most successful teams, Supersport United FC, in 1996 for a then-record South African club to club transfer.

He was a success at Supersport and his big move to Europe came in 1998 when he signed for Swiss club FC Luzern. He had a good debut European season in Luzern and did enough to impress Christian Gross, manager of Swiss giants FC Basel. He spent the next three seasons at Basel, playing over 90 games and scoring 48 goals.

His period at Basel was undoubtedly the best of his career, winning national titles and playing in European competitions culminating in him appearing in the champions league in 2002–03 season. Basel went on to the final group phase of the competition that year.

A move to England was on the cards next for Koumantarakis, signing for Championship outfit Preston North End in January 2003. He was a big signing for Preston but failed to live up to expectations as he was injured on international duty. He left Preston for German club Rot-Weiß Erfurt in the 2004–05 season but his time there was plagued by injury and only played a handful of games.

Erfurt released Koumantarakis at the end of the season and he signed for SpVgg Greuther Fürth. He retired without playing a game for Fürth after failing to overcome his persistent knee injury.

Koumantarakis played for the South African national team from 1997 until 2004. He was drafted into the squad often (over 60 times) but was usually a reserve behind the likes of Benni McCarthy and Shaun Bartlett.

The high point of his international career was playing at the 2002 FIFA World Cup in South Korea and Japan where he made a substitute appearance in all three of South Africa’s group matches. In total, he accumulated 13 caps scoring one goal.

He has an estimated net worth of $200,000 which he has earned from his career as a footballer.

Drop your queries regarding George Koumantarakis Biography below in the comment box.