Nyalleng Thibedi (born 4 September 1980) is a South African actress, model and chemical engineer. She is popularly known for her role as Zekhethelo Uzalo. 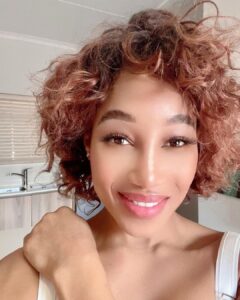 In 2001, Thibedi graduated from the University of Cape Town with a degree in Chemical Engineering. She also studied acting in New York.

She had her debut work in 2008 while she was working with the New York Film Academy.

In 2012 she had a guest starring role in an episode of the SABC2 police procedural drama series Streets of Mangaung and has subsequently performed in several Lokshin Bioskop series and films for Mzansi Magic, including iLobolo, The Society and Single Mothers.

In March 2017 she joined Uzalo as Zekhethelo.

Thibedi has a net worth between $500 000 — $1 million. She has made most of this from her acting and modelling career.

The actress has a son who she is raising as a single mother.