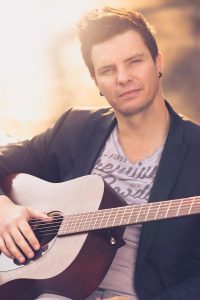 Hoogendyk is a self-taught musician, teaching himself to play the guitar at the age of 16. During his adolescent years, he started writing his own music and gained experience as a busker on the streets of Johannesburg. During high school, he played in several bands but chose to broaden his experience overseas, busking in London and Scotland.

Musical education
Hoogendyk’s mother, a classical piano teacher, provided him with exposure to classical music throughout his childhood.

When he returned to South Africa, he undertook formal music studies, focusing on piano, guitar, singing and songwriting.

In 2010, Hoogendyk participated in Idols South Africa (season 6). He won the competition with 64% of the votes and shared his prize money with runner-up Lloyd Cele.

Elvis Blue
Elvis Blue was released in November 2010 and received Gold status 29 days after its release, going platinum in 2011. The album features a duet with Lloyd Cele called ‘Little Hero’.

Recording began straight after Hoogendyk won Idols South Africa, and was produced by Brian O’Shea, Crighton Goodwill and Jake Odendaal who are all South African Music Awards Producer of the Year Award winners.

The album combines original songs by Hoogendyk with those of other songwriters.

Journey
Hoogendyk travelled to America to co-write new material for Journey with Jeff Franzel, Richard Harris and Pam Sheyne who together composed the hit single, ‘Lifeline’.