Bridget Van Kralingen (born 1963) is a business executive born in England and raised in South Africa. Beginning in 2016, she served as Senior Vice President of IBM Global Industry Platforms in New York City, and she is now Senior VP of IBM Global Markets.

Before joining IBM in 2004, she worked for nearly 14 years for Deloitte in several management positions. Educated in South Africa, she has been named in Fortune‘s 50 Most Powerful Women list since 2005. 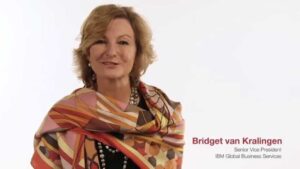 She received a master’s degree in commerce and psychology from the University of South Africa in 1990.

Van Kralingen began her career as a senior researcher for the Council for Scientific and Industrial Research in South Africa from 1986 to 1989. She then moved to Deloitte in South Africa, where she was Managing Partner for Strategy and Organization Development from 1989 to 1997.

In 1997 she moved to New York City to serve as National Managing Partner for Financial Services at Deloitte Consulting, a position she held until 2004.

In 2012 Bridget Van Kralingen was promoted to Senior Vice President of IBM Global Business Services. As Senior Vice President, van Kralingen oversaw more than 100,000 consultants and service providers in over 170 countries. From 2012 through 2019, she led IBM’s Industry Platforms, establishing IBM as the leader in enterprise blockchain, launching industry platforms with clients and managing IBM’s industry capabilities and largest accounts

In 2011 Bridget Van Kralingen joined the board of directors of the Royal Bank of Canada. She is also an advisory board member of the nonprofit organization Partnership for New York City.

She was named one of the Top 25 Consultants in 2006 by Consulting Magazine, and one of the 100 Most Influential People in Finance in 2005 by Euromoney.

He has an estimated net worth of over $10 million.