Evans was a founding member of Ajax Cape Town and played for Ajax for the whole of his 13-year career. Brett Evans is currently the head coach for boys youth at Albion SC as well as an assistant coach at Point Loma Nazarene University. 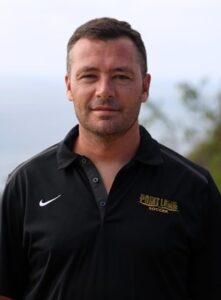 Evans was a founding member of Ajax Cape Town making his debut in 1999. He played for Ajax for the whole of his 13-year career and has 311 starts which is a club record.

In 2012, Evans went on trial with Major Soccer League club Portland Timbers and played in a 2–0 win over Seattle Sounders in a reserve team match.

Evans suffered knee and groin injuries and left Ajax in 2012 on the expiration of his contract.

He is one of the few South African players to have played for all the national teams and was also part of South Africa’s squad at the 2008 African Cup of Nations. He has ten full international caps.

While playing left-back at Ajax CT, Evans was an assistant coach for the youth u12 team, from 2010-2012. He is currently the head coach at Albion SC and assistant coach at Point Loma Nazarene University.