Akani Simbine (born 21 September 1993) is a South African sprinter in South Africa. He set a record on July 9, 2015, after winning a gold medal at the 2015 Universiade in Gwangju, South Korea.

Akanni studied Information Science at the University of Pretoria. 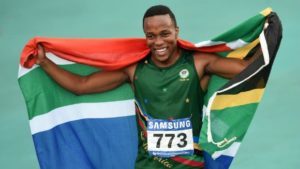 He came to prominence in 2012, at his third season as sprinter, when he smashed the SA junior 100m record clocking 10.19 at the zone VI Games in Lusaka.

He also competed in the 100 metres event at the 2013 World Championships in Athletics and 2016 Summer Olympics.

In 2014 he set the second-fastest 100m time by a South African with 10.02 sec at the National Championships in Pretoria. Later he reached the 100m semi-final at the Commonwealth Games in Glasgow and he finished fifth in the 200m final.

On 18th July 2016 he broke the South African record in 100m with a time of 9.89 seconds at the Gyulai István Memorial in Székesfehérvár.