Zandile Khumalo (born 15 February 1993) is a South African musician and songwriter. She released her debut album, Izikhali ZamaNtungwa in 2018. 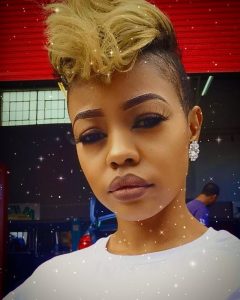 Zandie is the younger sister of Kelly Khumalo. Kelly Khumalo is a singer, dancer, and actress. She was born on the 1st of November, 1984, and is 35 years old as of 2019.

In February 2020, Zandile revealed her decision to “divorce” Kelly, also stating that she’s distancing herself because her sister is a “toxic” person, among other things. This was following an alleged scam involving Zandie and her husband, Mhlo Gumede.

Zandile is married to the communications manager of Mbala Noise, Mhlo Hloni Gumede. The couple tied the knot on the 1st of October, 2016 in Mgangeni, KwaZulu-Natal.

After toiling for years as her sister’s stylist, backing vocalist and manager and much persuasion from her husband and Kelly, Zandie stepped into the recording studio to record for leisure.

I thought I was just singing and recording for myself, but a beautiful song came out of it called Themba which was my first single in 2016. It went to the radio and I never looked back since then.

She released other songs like Soze and Bittersweet which got the industry to sit up and notice her talent.

In February 2018, Zandile drop her debut album titled Izikhali ZamaNtungwa. The Afrosoul album is made up of 13 songs.