Tsholofelo Matshaba (born 4th July 1983) is a SAFTA award-winning actress from Pretoria, South Africa. She has graced the screens of South African television with her roles on Muvhango, Skeem Saam and The River.

She played the role of the crafty gold-digger Meme on SABC2’s soapie Muvhango. 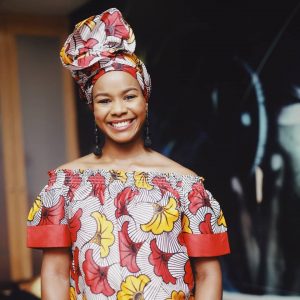 The actress attended Tshwane University of Technology from 2002 to 2004. She holds a National Diploma in Musical Theatre.

Tsholo was married to radio presenter, Chris Matshaba before his death. The couple got married on the 27th of December 2014 in Ramokokastad.

Chris was a DJ at Motsweding FM and also ran a business. He died in 2018 after battling with cancer.

After finishing from the university, Tsholo started her career as a stage actress. She featured in a number of stage plays  including Born in the RSA 2, Melodies of Love, Jesus Christ Superstar, The Lion King, Soweto Story, Aladdin and Robinson Crusoe.

Since then she has featured on television series and soapies such as Muvhango, Skeem Saam, Mamello, The Throne and others. She currently plays the role of Kedibone Mokoena on The River.