TKZee is a South African kwaito music group that gained its popularity in late 1997 and early 1998 with their hit singles Palafala and Shibobo. The group comprises of Tokollo Tshabalala, Kabelo Mabalane, and Zwai Bala.

TKZee released their first full album in 1998 titled ‘Halloween’ which became a huge hit with smash singles “Dlala Mapansula” “Mambotjie” & “We Love This Place”. The group in collaboration with Bafana Bafana and then Benni Mc Carthy produced Shibobo in June 1998.

At the opening ceremony of the 2010 FIFA World Cup at Soccer City (FNB Stadium) in Johannesburg, they performed their hit single Shibobo. 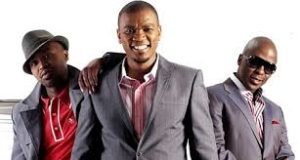 The 90s group was formed by actor Kabelo Mabalane, musician Zwai Bala and Tokollo Tshabalala. Zwai shared a clip on Instagram from one of their hits in celebration of the 20-year anniversary.

Today 20 years ago, TKZee released this classic album. We are deeply humbled to have been an integral part of Africa’s cultural evolution. Happy days are here again. Hola 7 for life!” he captioned the post.