Mboweni was the eighth Governor of the South African Reserve Bank thereby becoming the first Black South African to hold that position. 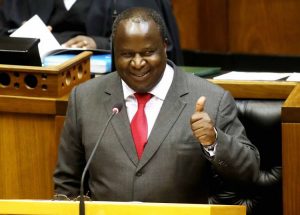 Between 1979 and 1980, he attended the University of the North where he registered for a Bachelor of Commerce degree. He, however, did not complete his studies there and left South Africa in 1980 to go into exile.

Mboweni was Deputy Head of the Department of Economic Policy in the ANC.

He was a member of the ANC’s National Executive and National Working Committees and also represented the ANC on several domestic and international platforms.

From May 1994 to July 1998, he served as Minister of Labour in South African President Nelson Mandela’s cabinet.

He joined the SARB in July 1998 as Advisor to the Governor. e succeeded Dr Chris Stals as Governor of the Reserve Bank on 8 August 1999.

He has an estimated net worth of $1 million to $5 million which he has earned from his career.