Timothy Omotoso (born 14 July 1958) is a Nigerian pastor who heads the  Jesus Dominion International, based in Durban, South Africa.

Tim is currently in jail and on trial for 63 charges of rape, human trafficking, and racketeering.

He was arrested on the 20th of April, 2017 at Port Elizabeth airport by the South African priority crime unit, Hawks. 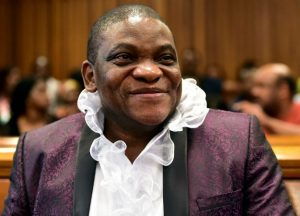 He is married to Taiwo Omotoso, who is also a minister of the gospel. They have three children together, two boys and a girl. Their names are Victoria, John, and Victor.

Timothy Omotoso is the senior pastor of Jesus Dominion International in Durban, South Africa. The church also has branches across South Africa, France, and the UK.

Omotoso has mentored young talents and groomed them even to composing their own songs and producing their albums.

This he does through a youth project in South Africa called “Youth Empowerment Project” (YEP). Examples of his mentees include Grace Galaxy and Simply Chrysolite.

In his quest to reach more people around the world, Omotoso founded Ancient of Days Broadcasting Network (ADBN), a 24-hour satellite TV station which airs across the Caribbean, Africa, Mexico, Middle East, Europe, and United States.

His weekly TV broadcast, ‘Just As I Am’, features music, sermons, and miracle sessions and airs across various networks.

Omotoso is a talented musician and instrumentalist. He learned how to play the piano, the guitar, drums, and other musical instruments before the age of 10.

In the 1980s, he served as a music director for Ebenezer Obey’s Decross Band & Inter Reformers’ Band in the 80s.

The man of God has been accused of rape and human trafficking.  Omotoso is alleged to have groomed people and abused them from the age of 14.

If the court finds that the allegation of sex with minors is true, he will be convicted of statutory rape regardless if the act was consensual or not and he may face a life behind bars.

Over 30 young girls have come forward to detail their experiences at the hand of the alleged sexual predator.  Two of these girls are Anele and Neliswa – former Idols SA contestants. The two girls spoke against Tim in plain truth.

The two claimed to have known about the abuse that went on in the church but kept quiet because of fear and threats that they got from the pastor. The twins who lived in the pastor’s house for almost 12 months said that it was their worst experience in life.