Thuso Mbedu (born 8 July 1991) is a South African actress. She played the role of Kitso Medupe in the Soap opera Scandal! and Nosisa in Isibaya

She also acted as Boni Khumalo in Saints and Sinners and was nominated for an Emmy Award for her role in the telenovela Is’Thunzi. 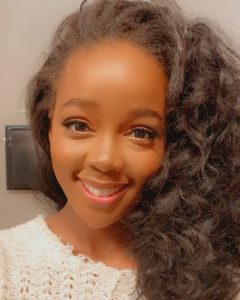 She was born on the 8th of July 1991 in Pietermaritzburg, Kwa-Zulu Natal, South Africa. As of 2021, she is 30 years old and celebrates her birthday on July 8th every year.

She attended the University of Witwatersrand at age eighteen, where she studied Physical Theatre and Performing Arts Management. This resulted in her graduating with honours.

She also attended the Stella Adler Studio of Acting in New York, USA.

In August 2014, she made her screen acting debut playing the role of Boni Khumalo in the Mzansi Magic drama series Saints and Sinners, in August 2014.

In the second season of the Mzansi Magic soapie IsiBaya, Thuso also played a small recurring role, before she landed her higher-profile role as a journalism student.

The popular actress has also featured in other television series like Snake Park, Is’thunzi and Our Perfect Wedding.

There are rumours that she is in a romantic relationship with Musa Mthombeni. Both of them have come out to say that they are just friends.

Musa Mthombeni in May 2018 tweeted that his mom had corned Thuso to ask about their relationship status.

“My mother cornered @ThusoMbedu after the funeral to ask her why she isn’t giving me a chance and HER grandchildren. My mom has reached a new level of needy!”

She has an estimated net worth of $1 Million – $5 Million which she has earned from her successful acting career.

Drop your queries regarding Thuso Mbedu Biography below in the comment box.