Tembeka Ngcukaitobi (born 25 December 1976) is a South African legal practitioner, political activist, author, and speaker. He has been tremendous in his practice and has contributed massively to the South African community.

He was part of the Economic Freedom Fighters (EFF) legal team that argued for the release of the state capture report in the North Gauteng High Court. 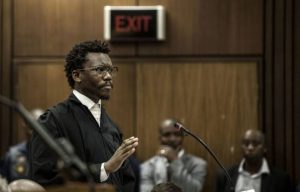 Adv Ngcukaitobi came out as a top student during his matriculation year and went on a bursary to study law at the University of Transkei. He also holds the degrees of Master of Laws (LLM) from Rhodes University and the London School of Economics.

Adv Ngcukaitobi’s decision to become a lawyer was greatly inspired by his father. After he found out that his father was studying law at the University of South Africa before he died, he made up his mind to finish what his father started.

In his early years as a lawyer, he served as a law clerk to Chief Justice Arthur Chaskalson at the Constitutional Court of South Africa. He also worked as a candidate attorney and as Director of its Constitutional Litigation Unit at the Legal Resources Centre.

Tembeka is also an Acting Judge at the Land Claims Court of South Africa, with his notable work in that regard being the Msiza case. He played a critical role in the removal of the Former President of South Africa Jacob Zuma.

Tembeka Ngcukaitobi achieved an enormous feat in 2019 when he became a senior counsel just eight years after he became an advocate.

Becoming a senior counsel in South Africa requires a minimum of 10 – 15 years of experience.  His areas of practice include Administrative Law, Constitutional Law, and General Regulatory Law.