Stuart William Baxter (born 16 August 1953) is a well-known football manager and former player who is currently the head coach of the Kaizer Chiefs.

Baxter played professionally for a number of clubs in England, Scotland, Australia, Sweden and in the United States. Baxter was named as South Africa coach for a second time on 4 May 2017, replacing Ephraim ‘Shakes’ Mashaba, who was sacked in December 2016. 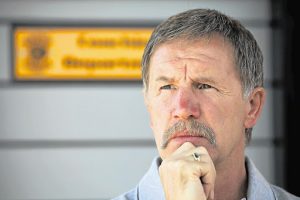 Stuart is currently married to Cecilia Baxter and they have children together.

Baxter has a son, Lee, who is also a former professional football player and now a goalkeeping-coach for Kaizer Chiefs. His other children are Sean Baxter, Kelly Baxter, Natalie Baxter

Bafana Bafana coach Stuart Baxter earns a lot less than it was originally believed after it emerged this week that the Briton’s monthly earnings are less than his predecessors Ephraim ‘‘Shakes” Mashaba and Pitso Mosimane.

Sunday Times can reveal that the Bafana coach earns R490,000 a month, which is considerably less than the R1-million a month salary he was reported to be earning after he was appointed to the national team coaching seat last year.

His predecessor Mashaba, on the other hand, earned R550,000 a month while Mosimane took home just under R800,000 a month.

South African Football Association (Safa)  communications head Dominic Chimhavi said while he could not reveal Baxter’s salary, it was nowhere near the R1-million a month that has continued to be linked to his name since last year.

He has an estimated net worth of $1 million which he has earned as a football manager.