Jason Goliath (born 15 November 1979) is a South African actor, comedian, businessman, radio and TV presenter. He is popularly known for his role as Gatiep, a resident in the Sandton apartment block, in the SABC1 sitcom Ses’Top La. 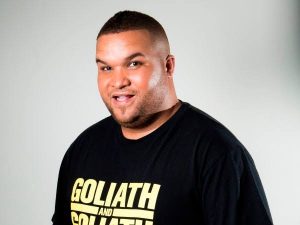 He is married to media publicist Sian Bailey. The couple married in 2019 and made headlines with their off-beat wedding attire. They dressed in jeans, sneakers and matching T-shirts with bride and groom printed on it.

He was a featured comedian in the stand-up comedy series Comedy Central Presents… Live @ Parker’s, in November 2012.

In 2015 he was one of the 10 celebrity contestants on the eighth season of the reality competition series Strictly Come Dancing. He was partnered with professional dancer Samantha Bele Viana. In 2016 he began hosting the late night talk show Larger Than Life on SABC3.

Jason Goliath has an estimated net worth of $500 000 which he has an from his successful career.