Sizwe Motaung (7 January 1970 – 16 August 2001) was a South African football player who played for Jomo Cosmos, Mamelodi Sundowns, St. Gallen, CD Tenerife, Kaizer Chiefs, and Orlando Pirates, as well at the international level for the national side.

He was part of the squad that won the 1996 African Cup of Nations. Sizwe died of an AIDS-related disease at his home in Newcastle on the 16th of August 2001, at the age of 31. 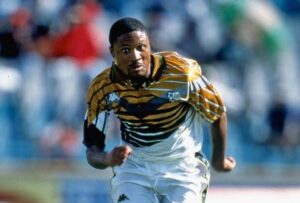