Phuti Lekoloane (born in 1992)  is a South African footballer who plays as a goalkeeper for Tornado F.C. in the SAFA Second Division.

He is an LGBTQ activist and popularly known as the first openly gay male footballer in Africa. 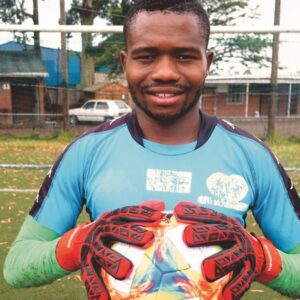 He was born in Moletjie, Polokwane in Limpopo province, South Africa. His exact age is not known but he is between the age of 28 – 29 years old.

Lekoloane grew up in Tembisa. He says he was born gay and had always known he was gay. He always had a liking for sports, he played netball and football as a teenager.

Lekoloane played for JDR Stars, an ABC Motsepe League team, a Pretoria-based organization, on their SAFA Second Division team as a goalkeeper. He wears the 91 shirt in honour of John Moshoeu, a South African Nations Cup champion in 1996, who was his mentor.

He left JDR Stars because of the homophobia but was later recruited by Tornado F.C., another SAFA Second Division team.

He is South Africa’s first openly gay footballer, after coming out publicly in December 2015. His teammates have been mostly supportive, Lekoloane thinks because he has a good attitude and accepts himself. However opposition teams and their fans have taunted and harassed him.

Lekoloane has dealt with homophobia in the sport; at a team’s trial in the mid-2010s, the organization’s representatives said they did not know how to accommodate him, and thought he would be bad for their image.

As of October 2017, he has been on trial with five Premier Soccer League teams but they were concerned about his sexuality.

He feels the homophobia has held him back professionally from playing in the Premier Soccer League. He has vowed to be visible and stand up to the discrimination:

“MY PURPOSE IN LIFE IS TO PAVE THE WAY FOR THE LGBTQI COMMUNITY IN FOOTBALL, TO FIGHT FOR INCLUSION AND EQUALITY,” LEKOLOANE SAID. “THERE ARE A LOT OF GAY FOOTBALLERS, BUT THEY ARE SCARED TO COME OUT. I HAVE MET A LOT OF GAY GUYS WHO HAD TO RETIRE FROM FOOTBALL BECAUSE OF DISCRIMINATION.